Picross is a distant cousin of the game Minesweeper.


For some time now, I have been playing Picross, also known as Nonogram, every day.
Picross is a game where you have to discover the colored squares of a grid based on clues.
Here is an example of a started game. 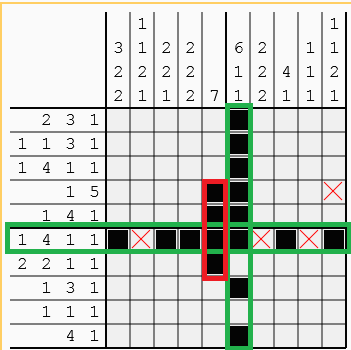 At first the grid was empty.
The clues in the green column told me that it contains three groups of black squares: one group of six squares and two groups of one square. There is only one possibility to have this result and so I discovered this column.
Then I also found the green line.
Finally, the column circled in red contains a single block of 7 black squares. I am therefore sure of the presence of at least four black squares. By continuing like this, we end up finding all the black squares.

As I spent a lot of time playing this game, I preferred to spend this time creating a new version that I present to you.

Try it and you will be passionate about it!