Hebi, the little snake, must eat all the apples to reach the next level. But, be carreful, it must not eat itself. Click here to play Hebi

Hebi has accompanied my life as a programmer and I am happy to share his story with you.
Hebi means snake in Japanese and I was inspired by the game of Snake. In this game, a snake eats pellets that make it grow taller. You have to eat a certain number of them per level without biting any part of the snake.

After my studies, I worked for an IBM research center in the south-east of France and discovered the operating system OS/2, a competitor of Windows and Mac OS. This system was abandoned by IBM. Quite naturally, I programmed little games to have fun. I added a labyrinth and that's how Hebi was born. I use some of the mazes from PACPAC, a Pacman game that I also created for OS/2. 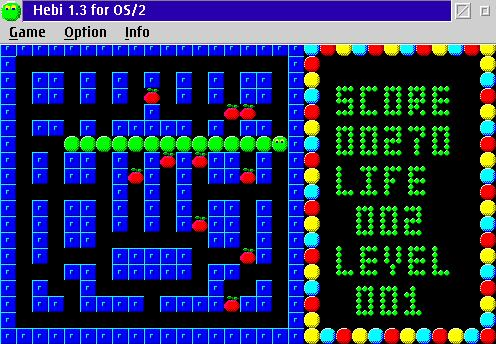 Then OS/2 disappeared. So I adapted Hebi for Windows and that's when I realized the importance of creating easily portable games. Hebi Windows was a carbon copy of the OS/2 version. I offered my games as shareware in magazines or BBS (peer to peer forums long before the existence of the internet).

In my new job, my colleague Raymond introduced me to the java language, which has the particularity of being independent of operating systems. I had found my Grail. I adapted Hebi to the Java language and discovered by the same the object programming. The Internet was coming and was a great way to disseminate his creations to the whole world. In 1999, I definitely took the Internet step and created arcadevillage.com.
The site was really different from today. Here is a small image from webarchive. 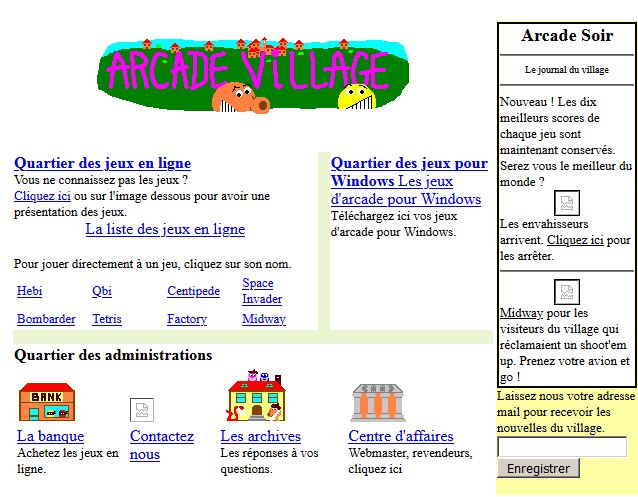 Thanks to ArcadeVillage, I got noticed by Nokia, who offered to adapt Hebi for his smartphone, the Communicator. And no, Apple did not invent the smartphone ! That was Hebi's heyday, since it is presented at a major conference in HonKong to demonstrate that we can make color games on smartphones. Alas, I did not understand that smartphone games are going to develop at this point. I only have one fleece in the colors of Nokia left in memory of that time...

But Internet is a dark place where wars and chaos reign. Sun, the company responsible for java, goes bankrupt. It is bought by Oracle which will sabotage Java for its own needs. The applets, these small programs that ran in browsers, disappear and my games with them. I think about giving it all up, then I watch again the movie Tron and realize that a designer cannot give up on his creations.
So I created AVJukeBox which allowed those who wanted it, including me, to be able to still play with my games by downloading an application on their computer.

Noting that Hebi remains one of the keywords allowing access to my site, I decided to offer it in javascript directly playable on your browser.

Nostalgia! Click here to play Hebi PS: If you see Hebi 2 or Hebi 3 on the internet, it's not me. I am very honored to have popularized the word Hebi. The real star will always be Snake!
ArcadeVillage.com 1999 - 2022